Can you get a DUI even if the officer never saw you driving?

Over the years, the attorneys at Sammis Law Firm in Tampa, FL, have been retained to represent clients after they were arrested for DUI even though they didn’t drive. Actual physical control cases involve a person being found outside the vehicle by the time law enforcement arrives or sitting in a parked vehicle when the officer approaches.

DUI defense attorneys sometimes call these the “parking while intoxicated” or “no driving DUI defense.”

A conviction for DUI requires proof that the defendant either:

For the prosecutor, proving actual physical control cases at trial are usually much more difficult. In these cases, a criminal defense attorney might be able to beat the case in one of the following ways:

Even if the case gets to a jury, many jurors are reluctant to find the “actual physical control” evidence to be sufficient if the officer never saw the person driving.

Attorney for DUI with “Actual Physical Control” in Florida

If your DUI involves an allegation that you were in actual physical control of the vehicle, even though the officer never saw you driving, then contact an experienced DUI defense attorney at Sammis Law Firm. We fight DUI cases from our main office in downtown Tampa in Hillsborough County, FL. We also have a second office located in New Port Richey in Pasco County.

Whether this is your first DUI or a second offense, we can help. We understand the best ways to fight DUI cases involving a breath test, blood test, urine test, or refusal to submit to a chemical test.

If you were accused of driving or being in actual physical control of the vehicle, call us to learn more about the best DUI defenses that might apply.

Contact us for a free consultation to discuss the charge pending against you, the best defenses to fight that charge, and the best ways to avoid the typical penalties imposed in that type of case.

Common examples of cases involving “no driving” or an accusation of “actual physical control” include:

What constitutes actual physical control when the location of the keys is unclear?

Law enforcement officers are trained to be mindful of all factors that would indicate the driver is in actual physical control if the key is not in the ignition including:

“Whether the law enforcement officer had probable cause to believe that the person whose license was suspended was driving or in actual physical control of a motor vehicle in this state while under the influence of alcoholic beverages or chemical or controlled substances.”

The determination is made by looking at the totality of the circumstances:

“In determining whether the police have probable cause . . . the sufficiency of the knowledge of the officers must be determined, not by analysis of the effect of each known circumstance in isolation, but by a conclusion as to what a reasonable man, knowing all the facts which the officers knew from their investigation would have believed under the circumstances.”

“A determination of ‘whether or not an individual is in actual physical control of a motor vehicle while under the influence is fact-specific and must be determined on a case-by-case basis.’” Heath v. Dep’t of Highway Safety & Motor Vehicles, 7 Fla. L. Weekly Supp. 304a (Fla. 9th Cir. Ct. 2006).

Sufficient Proof at Trial of Driving or Actual Physical Control

At trial, the issue is whether there was sufficient proof that the subject was driving or in actual physical control of the vehicle, such that the proof rebutted a reasonable hypothesis of innocence. The issue can be raised at trial during a motion for judgment of acquittal (JOA).

For a person to be found guilty of driving under the influence, there must be proof the person was driving or in actual physical control of a vehicle. § 316.193, Fla. Stat. In Florida, the term “actual physical control” is defined to mean that the defendant must be physically in or on the vehicle and have the capability to operate the vehicle, regardless of whether the defendant is actually operating the vehicle at the time.

The courts have found that “evidence that the key was in the ignition does not inexorably lead to the conclusion that the defendant was in actual physical control of the vehicle.” Fielsman v. State, 537 So. 2d 603, 606 (Fla. 3d DCA 1988). Instead, the presence of the key in the ignition is merely one fact to be considered. Id.

At least one appellate court in Florida has indicated it was not “willing to stretch the concept of actual physical control to a case where . . . the [d]efendant is separated by a physical barrier from the vehicle keys.” State v. Perez, 24 Fla. L. Weekly Supp. 431a (Fla. Leon Cty. Ct. July 8, 2016).

In Perez, the court found that the officer did not observe defendant in actual physical control where [the] defendant was in the vehicle but the keys were not and there was no evidence defendant attempted to retrieve the keys.

Actual Physical Control of a Jointly Occupied Vehicle in Florida

When the vehicle is jointly occupied, a defendant’s knowledge and ability to control must be established by independent proof, which could include “either evidence of actual knowledge of the contraband’s presence or evidence of incriminating statements and circumstances from which the jury might lawfully infer the accused’s actual knowledge.” See generally, Ogle v. State, 820 So. 2d 1054, 1056 (Fla. 4th DCA 2002).

For example, in R.C.R. v. State, 174 So. 3d 460 (Fla. 4th DCA 2015), the court found that the evidence did not show proof of actual or constructive possession of drugs where the defendant did not have exclusive control of the area where the contraband was found and the contraband was not in plain view, which also put defendant’s knowledge of the contraband at issue.

If you were arrested for driving under the influence, the charge requires proof that you were driving or in actual physical control of the vehicle.

If the initial responding officer, doesn’t see you actually driving, then this issue might provide a very good defense to the charge, especially if:

Keep in mind, if the vehicle is jointly occupied, then Florida law necessitates independent proof to establish constructive possession.

The seminar material included a section on Actual Physical Control cases involving no solid proof of driving. The materials also presented four scenarios to teach the attorney hearing officers more about the law when it came to finding sufficient evidence regarding the actual physical control element.

Trooper dispatched to the scene of the accident. He observes two cars in the parking lot. Petitioner is in one of the cars in the driver’s seat of the car. Upon speaking with the driver, Trooper notices she has glassy, bloodshot eyes and the odor of alcohol emanated from her face. The driver is slouched over, sloppy in appearance, had slurred speech, and had trouble exiting the car and locating her driver’s license. The front end of the car was damaged.

YES – The Trooper’s observations were sufficient evidence for the hearing officer to conclude that the Petitioner was in actual physical control of the car. Under the totality of the circumstances presented to the Trooper was a key factor in the court’s decision. The court noted the Petitioner was sitting behind the wheel, exhibited indicia of impairment, and that the car in which she was sitting had damage.

YES – The Deputy’s observations provided sufficient probable cause to believe Petitioner was in actual physical control of the vehicle. There was no need, contrary to Petitioner’s assertions, to establish or note in the Criminal Report Affidavit or DUI whether or not the engine was running, the vehicle was in park or whether the key was in the ignition.

Officer called to a scene at the request of Fire/Rescue due to a vehicle parked in the drive-thru of a McDonalds. Prior to his arrival, Fire/Rescue arrived on the scene, observed the driver asleep behind the wheel, with the keys in the ignition and in neutral gear. One of the Fire/Rescue officials awakened the driver and instructed him to take the keys out of the ignition. The official then placed the keys on top of the vehicle.

The driver told the Fire/Rescue that he was tired and had been drinking earlier. The Officer called to the scene observed the driver’s speech to be slurred, that he had watery and bloodshot eyes, and detected the odor of alcohol coming from his breath. The driver refused a breath test, but eventually admitted he had several beers, including one he consumed an hour prior. The Officer placed the driver under arrest. 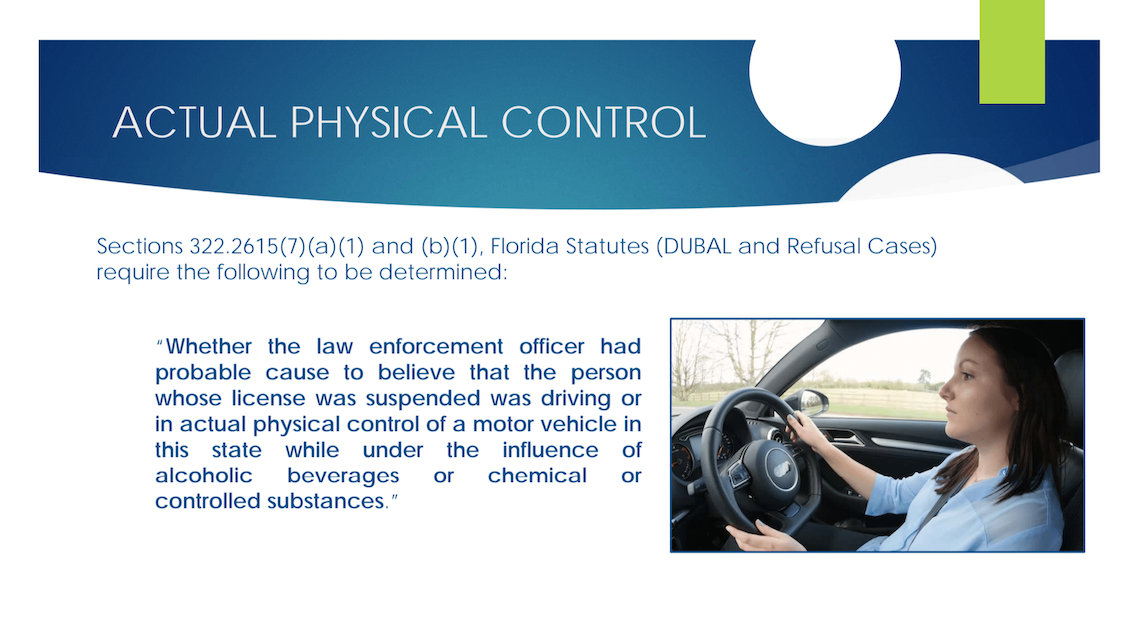 This article was last updated on Wednesday, September 17, 2019.

Joshua L. Monteiro As a Major in the U.S. Army Reserve with over 27 years of military experience, Josh understands.... read more »
Defenses