The University of South Florida (USF) Police Department takes an aggressive approach to traffic safety. In fact, several times a year, the USF Police Department participates in “Sobriety Checkpoints” on and around the USF Campus. The last checkpoint happened on August 11, 2018. The checkpoint operations at USF are usually followed by saturation patrols. In these saturation patrols, several officers saturate a particular areas looking for traffic violations.

If you were arrested by a police officer on or around the USF campus, you might also be facing a disciplinary action that could lead to your suspension or expulsion from the university. An attorney can help you at all stages of the case to minimize the consequences and fight for an outright dismissal of the charges.

Attorney for an Arrest by the USF Police Department

If you were arrested for DUI, or any felony or misdemeanor offense by police officers at the University of South Florida, then contact an experienced criminal defense attorney at the Sammis Law Firm.

DUI checkpoints are often found to be unconstitutional. Our attorneys aggressively fight any type of DUI checkpoint case. In fact, we have successfully fought cases involving DUI sobriety checkpoints conducted by officers at USF. In those cases, we have been able to file and litigate motions to suppress any evidence gathered during the checkpoint.

How Many DUI Checkpoints Does USFPD Have Each Year?

The two most recent sobriety checkpoints at USF included:

Example of an After-Action Report/Critique

After a checkpoint, the officers at the University of South Florida Police Department will prepare a memorandum that contains a After-Action Report/Critique. Reading the report is a good way to understand what happens during these checkpoints and the number of residents who are being detained. Once such memoradum is listed below.

There were no delays during this checkpoint.

There were 70 vehicles stopped in this checkpoint.

There were no vehicles waived through this checkpoint

There were no arrests made during this operation.

There was 6 UTT issued during this checkpoint.

Advanced administrative notification of this specific Sobriety Checkpoint was provided by Public Information Representative Audrey Clarke of the University of South Florida Police Department by means of a News Release provided at least 24 hours before the commencement of this Sobriety Checkpoint. This Checkpoint was also advertised on social media through the USFPD Facebook page.

The following information is related to the scheduled saturation patrol that followed the checkpoint:

Upcoming USF Sobriety Checkpoints – The USF website provides a lists the upcoming sobriety checkpoints listed by date with a link to the press release related to that event. 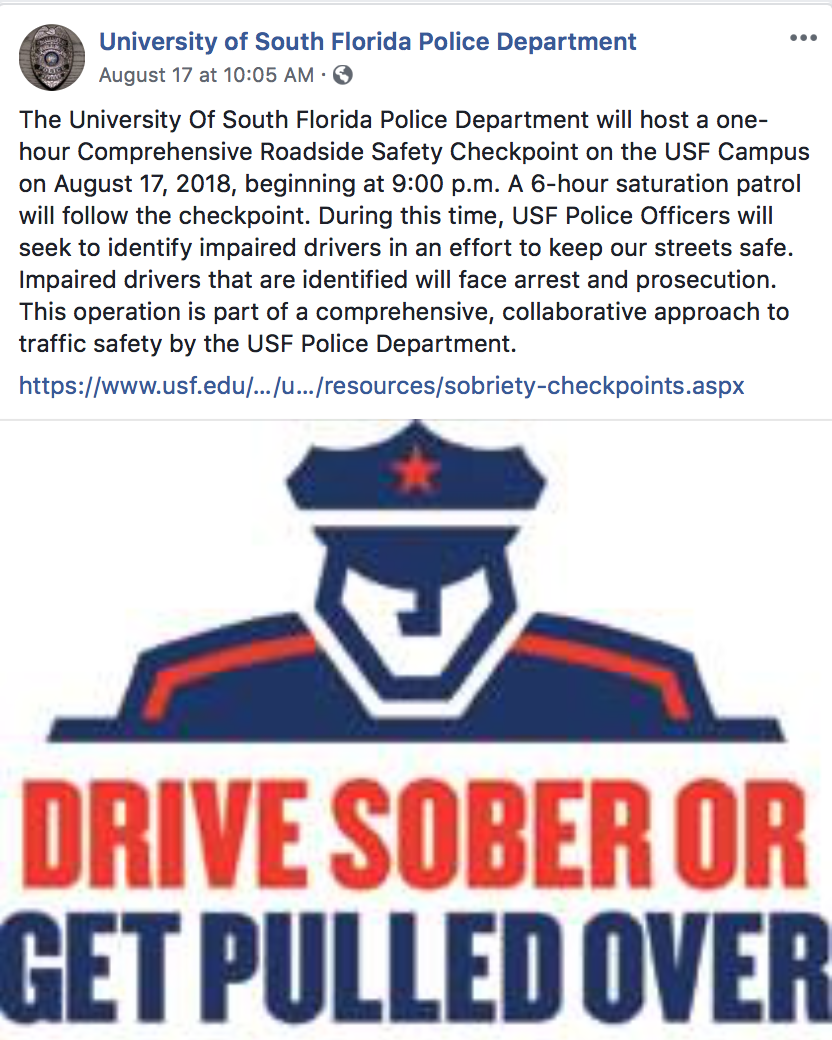 This article was last updated on Thursday, September 6, 2018.

Joshua L. Monteiro As a Major in the U.S. Army Reserve with over 27 years of military experience, Josh understands.... read more »
Resources