The Tampa Police Department (TPD) makes more than 1,700 arrests for DUI each year. The DUI arrests by TPD account for nearly one-half of all DUI arrests in Hillsborough County, FL. In fact, TPD has an entire unit of officers dedicated to DUI enforcement known as the “TPD’s DUI Squad.”

If you have been arrested for drunk or impaired driving by the Tampa Police Department, then contact the criminal and DUI defense attorneys at the Sammis Law Firm to discuss your case.

Find out what you need to do within 10 days of the arrest to protect your driving privileges and preserve all avenues of fighting the case.

Our attorneys understand the tactics used by the DUI enforcement officers with the Tampa Police Department. We know their standard operating procedures and how to effectively and aggressively fight cases involving an officer on the TPD DUI enforcement unit.

After an arrest by a DUI enforcement officer on TPD’s DUI Squad, call us to discuss your case during a free and confidential consultation. We can explain what you need to do within the 10 days after the arrest to protect your driver’s license.

Find out why our DUI defense attorneys always recommend demanding a Formal Review Hearing with the DHSMV Bureau of Administrative Reviews on Hillsborough Avenue in Tampa, FL.

Although lots of attorneys advertise for DUI cases in Tampa, FL, not all of them are devoted to DUI defense. By focusing on DUI defense, the attorneys at the Sammis Law Firm can help our clients fight for the best result during every stage of the case.

Contact us before you decide whether to waive all your rights so that you can get an immediate reinstatement of hardship driving privileges.

An attorney can help you decide whether you should contest the administrative suspension so that you have the best chance of getting it removed from your driving record.

Contact us to speak with an experienced criminal defense attorney at the Sammis Law Firm. Call 813-250-0500.

TPD’s DUI officers primarily work in the evenings and early morning hours patrolling the streets throughout the City of Tampa by responding to calls by other patrol officers who suspect a driver of impaired driving.

All of the officers on TPD’s DUI Squad are required to video the entire DUI investigation. When the officer on the TPD DUI unit makes the initial stop that video should show the following:

Sometimes the officers will say they didn’t initiate their video until after they decided to conduct a DUI investigation.

Sometimes the arresting officer will claim that the video equipment malfunctioned in some manner. If the failure to preserve the video was willful or if the officer intentionally destroyed the video, then the trial court can impose various sanctions including dismissing the DUI case entirely.

Those sanctions can include less serious sanctions such as preventing the officer from testifying about the subject’s statements or performance on field sobriety exercises.

In order to receive state and federal grant money, the Tampa Police Department participates in several DUI and sobriety checkpoints in Tampa throughout the year.

According to TPD spokesperson, Janelle McGregor, this DUI checkpoint was part of the Florida Department of Transportation (FDOT) grant.

Information from the Tampa Police Department 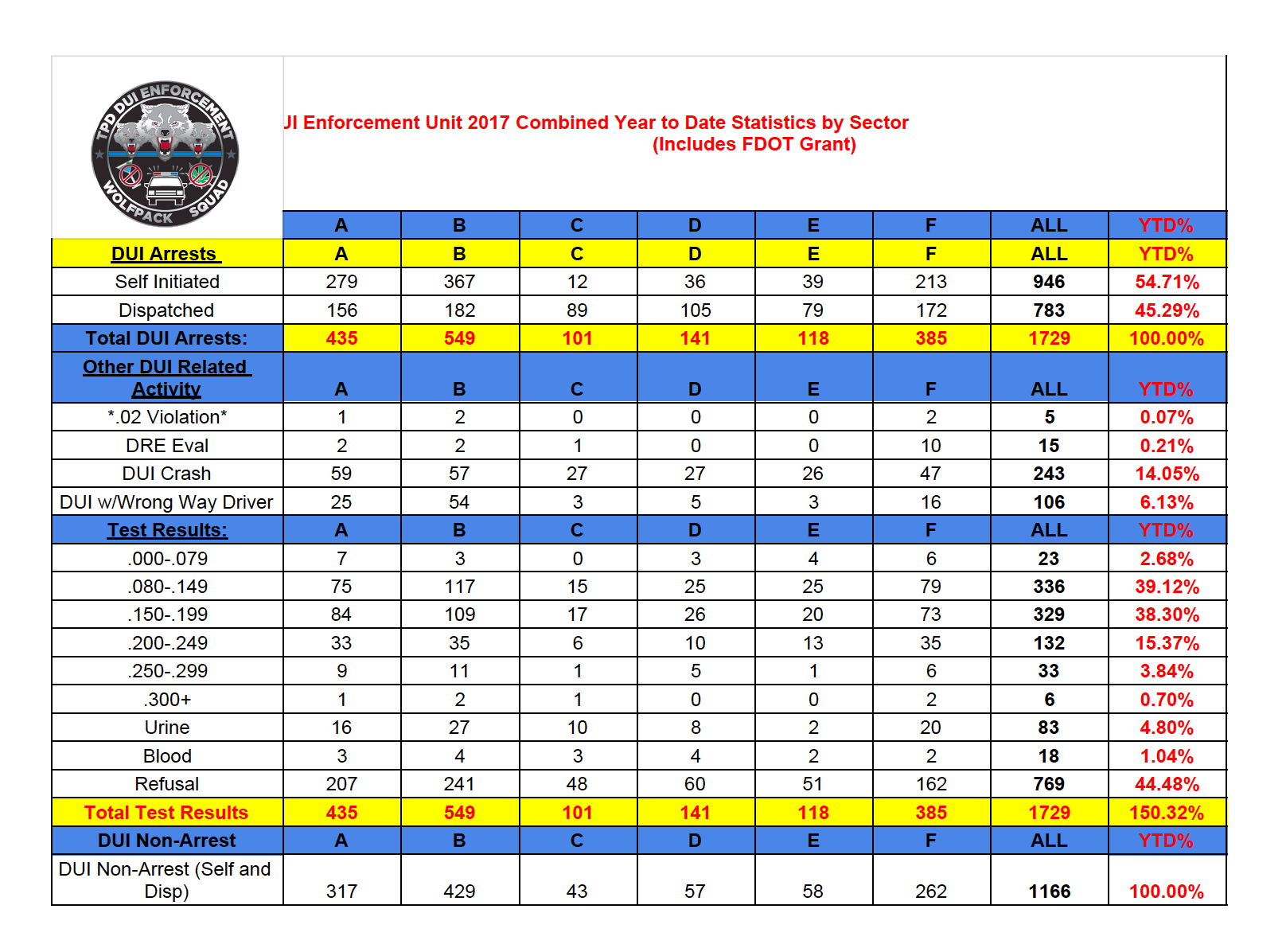 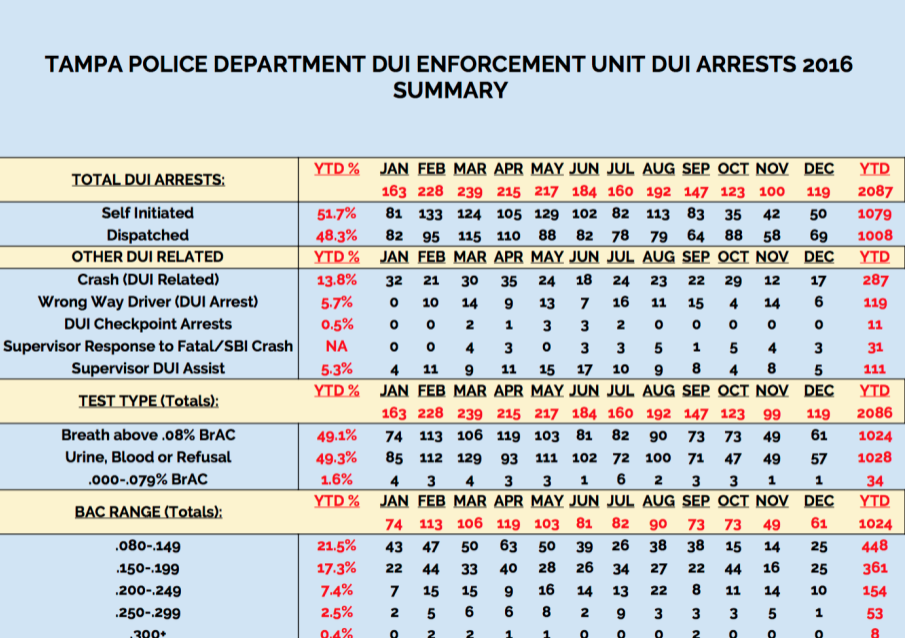 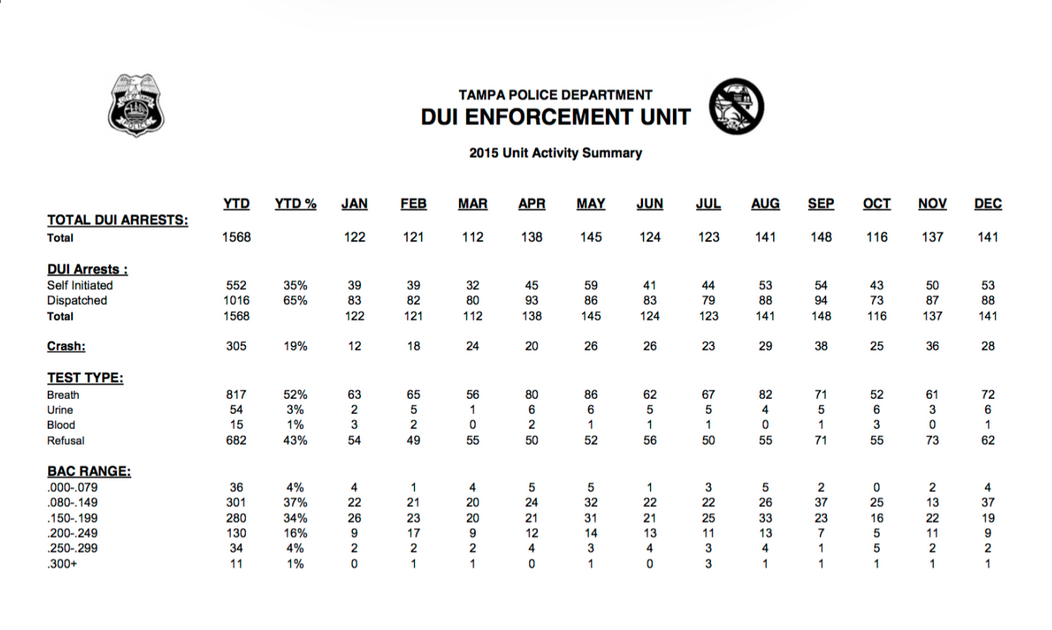 Wikipedia Page for Tampa Police Department – Read more about TPD including information on statistics related to jobs, salary, and employment. Find out about the department’s annual budget and priorities.

What Happens to TPD Officers Arrested for DUI – Read more about what happened when a Tampa police officer was arrested for driving under the influence over the weekend near East Dr. Martin Luther King Jr. Boulevard and Beechwood Boulevard.

Top 10 DUI Arrest Locations in the City of Tampa – The City of Tampa Police Department previously publish a list of the top 10 location where TPD officers were making DUI arrests including Ybor City, Kennedy Blvd. from Dale Mabry to Westshore, Howard Avenue from Kennedy Blvd. to I-275, Dale Mabry from Martin Luther King to Hillsborough Avenue, SOHO at Howard Avenue just South of Kennedy Blvd., MacDill Avenue from Kennedy to Columbus; and the Channelside District, the Tampa Palms area; Nebraska Avenue from Waters to Fowler, and the Courtney Campbell Causeway.

If you were arrested by an officer with the Tampa Police Department for DUI or any criminal traffic offense, then contact an experienced Tampa criminal defense attorney at Sammis Law Firm.

Our offices have been at the same location in downtown Tampa since 2008. We are familiar with the tactics used by TPD officers and their standard operating procedures.

Whether your case involves a breath test on the Intoxilyzer 8000, a blood test, a urine test, or a refusal to submit to testing, call us to discuss the facts of the case and the best defenses.

We represent men and women charged with a first-time offense or a second or subsequent arrest. Whether it was a routine stop or a traffic crash, we can help.